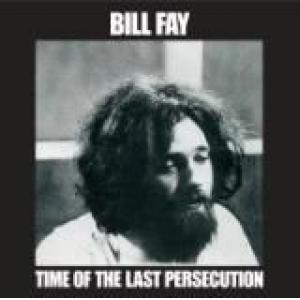 Bill is an enigmatic UK based singer, songwriter and pianist whose work is impossible to categorise. His late 60's early 70's work has a strong cult following, is highly regarded by many music journalists and is dark and haunting with songs rarely going over 3 minutes. Bill was originally signed to Decca and between 1967 and 1971 the label released a beautifully odd single ("Some Good Advice"/"Screams In The Ears") and two excellent albums (the lush, orchestrated Bill Fay and the rawer Time Of The Last Persecution).). Bill's fantastic songs have touched and inspired many- his fans include country rockers Wilco, songwriter/producer Jim O'Rourke, Ben Chasny of Six Organs Of Admittance and David Michael of Current 93. He continues to record . Screams In the Ears recently featured as the Channel 4 trailer music
Track listing: 1. OMEGA DAY 2. DON'T LET MY MARIGOLDS DIE 3. I HEAR YOU CALLING 4. DUST FILLED ROOM 5. 'TIL THE CHRIST COME BACK 6. RELEASE IS IN THE EYE 7. LAUGHING MAN 8. INSIDE THE KEEPERS PANTRY 9. TELL IT LIKE IT IS 10. PLAN D, PICTURES OF ADOLF AGAIN 11. TIME OF THE LAST PERSECUTION 12. COME A DAY 13. LET ALL THE OTHER TEDDIES KNOW