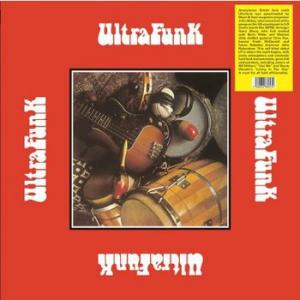 Anonymous British funk studio outfit Ultrafunk was spearheaded by Blues & Soul magazine proprietor John Abbey, who ran a fashionable record shop and label called Contempo in London's West End during the 1970s; he conceived of the group as the UK counterpart to US studio bands like MFSB. Arranger Gerry Shury, who had worked with Barry White and Maurice Gibb of the Bee Gees, drafted guitarist Chris Rae and bassist Frank McDonald (who often composed library music together) and future Rubettes drummer John Richardson to form the group, in situ. A lack of band photos, suggestive song titles and a predilection for American cover tunes led many to believe the band was US-based. Their self-titled debut LP is where the myth all begins, with a number of truly atmospheric and cinematic hard funk instrumentals, given added textural depth through full orchestration, including covers of Bill Withers' 'Use Me' and Stevie Wonder's 'Living In The City.' Though not quite as compelling as the better-known follow-up set, 'Meat Heat', there is still plenty to savour on Ultrafunk, making this debut companion disc a must-have for all true funk afficionados.