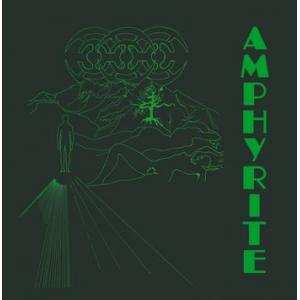 The French trio Amphyrite played an entirely instrumental progressive rock with electric guitar, bass, and drums. Their only LP - only 200 copies were made - has a collectors' value of 1000 € now."

The French trio Amphyrite was from Villefranche-sur-Saône, a town close to Lyon. They played an entirely instrumental progressive rock with electric guitar, bass, and drums, which reminds a bit of the early Guru Guru. Their sound, not calm and contemplative like Ash Ra Tempel, is in a constant flickering movement. Their one and only LP "Amphyrite" (Les Disques Le Maintec Bernard KO/750707) was released in 200 copies on a very small label in 1973. Today the LP has a collectors' value of 1000 €. Hans Pokora lists it with the highest possible rating of six units. In 2003, the LP was re-released legally on Amber Soundroom; the 500 copies are sold out since long. The CD here on hand has a substantial booklet in German, English, and French, with an extensive band story, including label repros and photographs of the band."