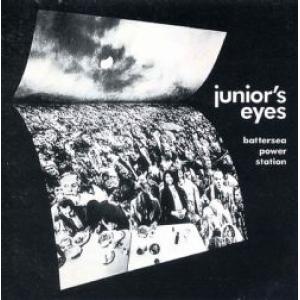 Re-mastered and expanded edition of the classic 1969 album “Battersea Power Station” by JUNIOR’s EYES. The band was the concept of guitarist MICK WAYNE (previously with The Outsiders who included Jimmy Page in their ranks) and latterly with Psychedelic outfit The Tickle.

After the break-up of the Tickle, Mick Wayne formed Junior’s Eyes in early 1968, initially with drummer John ‘Candy’ Carr and then with John ‘Honk’ Lodge (bass) and Steve Chapman (drums). They soon recorded a debut single with the help of pianist Rick Wakeman and producer Tony Visconti. The unit evolved with singer Graham ‘Grom’ Kelly and organist John Redfern in late 1968 and began work on an album. Battersea Power Station was released in June 1969 and was a landmark work, featuring a continuous suite of songs on the album’s first side and individual songs forming the flip side. It is now rightly regarded as a classic album of the period. Junior’s Eyes have also entered into the annals of rock history through their association with DAVID BOWIE.