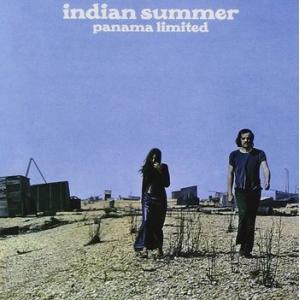 Esoteric Recordings are pleased to announce the release of  "indian Summer” by Panama Limited. The band were originally known as The Panama Limited Jug Band, a collective of musicians formed in the late months of 1968 and soon found favour with DJ John Peel, an early champion of their work, and they became one of the first signings to EMI’s new underground label, Harvest. Their self-titled debut album was released in July 1969 (one of the first on the famous imprint) and has since become a highly sought after record by collectors, with an original copy now being valued at many hundreds of pounds. The band became known as Panama Limited in 1970 and headed in an underground rock direction with a new line-up of Dennis Parker (lead vocals, guitar, banjo), Brian Strachan (guitar, mandolin), Dave Grifiths (Bass, Violin, Keyboards), Anne Matthews (vocals, harpsichord, percussion) and Gary Compton (harmonica). They released their only album in September 1970.

This Esoteric Recordings release features two bonus tracks taken from the band’s extremely rare 1970 single), has been newly remastered from the original Harvest master tapes and features a booklet that restores the original album artwork and includes a new essay.