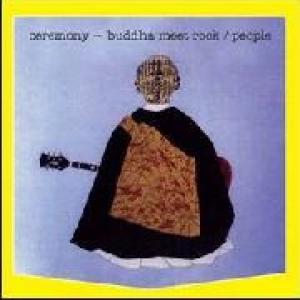 first 180g vinyl reissue No.16 on Julian Cope's Top 50 Japanese album chart pressed on 180g virgin vinyl
Nobody's sure if the muscians on this recording ever performed as a group or whether Ceremony was simply a studio super project. Certainly guitarist Kimio Mizutani had already enjoyed a certain amount of crticial exposure following stints with Love Live Life + One and Masahiko Satoh's Sound Brakers and it is Satoh's jazzy fuzz guitar licks that help to lift this album to a higher level. Unfortunately this was the ensemble's only album, but the concept work, Ceremony - Buddha Meets Rock, is an absolute classic. As the title suggests, this 1971 recording was an attempt to fuse Buddhist-influenced spiritual vibe into an innovative oriental form form of hypnotic psychedelic prog rock. . All in all a rather weird record but the sound is mindblowing - experimental and trippy, but never too free or over the top, and at times a more traditional Japanese style of music lurks in the background. A monumental album that's never going to go out of style."