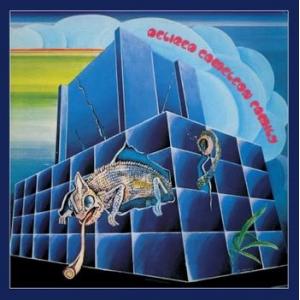 In 1975 Virgin Records released the first album of Cyrille Verdeaux compositions titled CLEARLIGHT SYMPHONY. Clearlight became the first French progressive rock band signed to a major British record label. Gathering accolades for its unique compositions and keyboard stylings, the music spanned from classical romanticism to lush experimentation. Primarily psychedelic, but also serving as a forerunner of new age music, the album's musical style manages to blend seemingly contrary elements: the symphonic rock concept is flexible enough to permit extensive jamming in both rock and jazz fusion styles.Clearlight Symphony does not officially have an artist name, but is now regarded as the first album by Clearlight who adopted the name later that year, after briefly using the name Delired Cameleon Family. Side one features group member Cyrille Verdeaux and three members of Gong; side two features the group that would become Delired Chameleon Family (Clearlight). Neither group is explicitly named as the artist.

After the release of Clearlight Symphony, the band returned to France to record their next album in March 1975 at the Pathé Marconi studios in Boulogne, Paris under the name Delired Cameleon Family. The group includes Ivan Coaquette of Musica Elettronica Viva. The music was also used as the soundtrack to the film, Visa de Censure No. X. The group were under contract to Virgin Records, but the album was issued by EMI Recordswho owned the film soundtrack rights, and effectively used its soundtrack status to do an end-run around the group's contract with Virgin, as the album is not really presented as a soundtrack. "Musique du film Visa de Censure No. X de Pierre Clementi" appears in small font at the top of the front cover, printed light blue on dark blue to reduce its prominence, and the film title is not mentioned at all on the label. The credits (in French) state: "produit par Pathé et Virgin" (Pathé Marconi was EMI's imprint name in France).

In this incarnation, the band featured a greatly expanded line-up which was to become typical of subsequent albums. The style of this album is looser in production, and less symphonic than its predecessor, with a strong emphasis on rock and jazz fusion jamming. Like other Clearlight albums, this one is performed in the style ofpsychedelic and new age music. The album is mostly instrumental, but with a few vocal pieces: two in French and one in English. "Raganesh" is in the form of an Indian raga, while other songs include jazz elements.

The controversial cover art shows a chameleon breaking out of a cube which could represent either a building or an LSD sugar cube, and folliage on the back cover composed of marijuana leaves. A whimsical attitude toward narcotics is also expressed in one of the song lyrics.