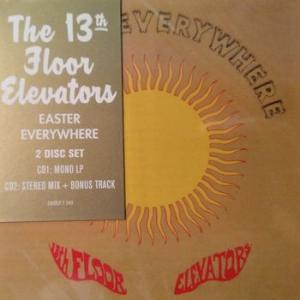 Released in November 1967, a year after their debut LP 'Psychedelic Sounds of...', the band, critics and fans alike consider 'Easter Everywhere' to be the Elevator's finest work.

Produced by Lelan Rogers, the music is delivered with an informed power and intensity of knowing.

Even the quieter tracks, "Dust" and "Had To Tell You" display a restrained beauty and purity of vision which perfectly counterbalances the intensity of "Earthquake" and "Slip Inside This House".

R.E.M., The Jesus And Mary Chain, Primal Scream, ZZ Top, Spacemen 3, Echo and the Bunnymen, Julian Cope and many more have covered their songs.

On 10th May 2015, the surviving members of the band (Roky Erickson, Tommy Hall, Ronnie Leatherman and John Ike Walton) performed a 50th Anniversary reunion concert at the Austin Psych Fest.

So significant was the event, it was covered by the media worldwide and in the band's honour, the name of the festival was changed to Levitation - a key track from 'Easter Everywhere'.

Disc 1 is the rare 'Mono Version' of the album remastered from the original vinyl - surviving International Artists suggests that as few as 120 mono stock copies were sold to order.

The mono mix offers a more solid sound throughout, with a notable heavier bass mix compared to the stereo amongst other key differences.

Disc 2 is the 'Original Stereo Mix', remastered in 2009 from the 2-track master by Paul Drummond and Andrew Thompson from Sound Performance.

The second disc also features bonus rare recording session outtake "Fire in My Bones", which was remastered in 2007 by Walt Andrus.

This mid-price 2CD edition of 'Easter Everywhere' is the ultimate deluxe edition of the album.

It is presented in brilliant jewel case packaging complete with a detailed 16-page booklet written by band expert Paul Drummond.

Recording of Special Merit Billboard magazine, November 1967 "Psychedelic masterpiece_ Easter Everywhere is an all-time higher key document." Mojo - 5-stars **** "As potent as The Doors, as virtuoso as Love and more out there than The Beatles ever were_A 24-carat masterpiece." Classic Rock "A broader expanse was never mapped out by a rock'n'roll band of its time." Julian Cope "I love those f**king guys." Johnny Depp