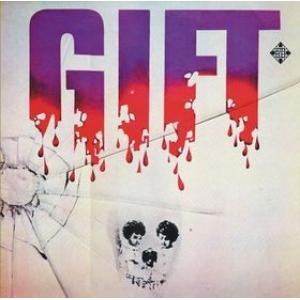 Gift were one of those "no compromise" heavy progressive bands, who've now achieved a considerable cult status. They started up in 1969 as the school band Phallus Dei. Three years later they recorded the first Gift album at Union Studios in Munich, produced by Otto B. Hartmann. Nick Woodland was listed on the sleeve of their first album, but he had quit Gift before the recording session began to join Subject Esq., later Sahara. The album comprised eight songs with no flutes, no woodwinds and no keyboards, just plain hard guitar riffs, to be compared to Hairy Chapter. Some of the lyrics had clear anti-drugs messages. Recently (1990) Second Battle re-issued this album in its original cover. Helmut Treichel left in 1973 and was replaced with Dieter Atterer. Blue Apple (1974) was also basically a heavy guitar album, but also featured keyboards courtesy of Dieter Frei (organ, piano, moog, mellotron, vocals). The album was recorded in Hamburg at Teldec Studios with Hartmann and Thomas Kukuck engineering. Both Gift albums are fine examples of German heavy progressive rock."