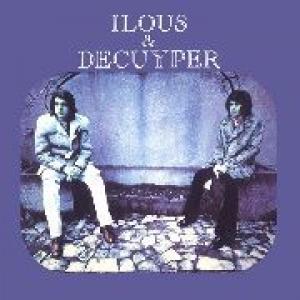 LP + 7"
Bernard Ilous came from a music lovers family, his parents were into jazz and classical music and the young Ilous inherited that sensitivity to the point of teaching himself to play guitar and piano. He discovered R&R and started doing covers of The Beatlesand Bob Dylan, but he soon showed skills to write his own compositions. He showed his work to music publisher Gerard Tavernier who signed him to his company and thus some of Ilous songs appeared on LPs by Françoise Hardy, Eric Charden, Johnny Hallyday, Dick Rivers, a.o. In 1969 his friend Claude Putterflam left his job at Vogue to create Flamophone records and he produced a single for Ilous, who was willing to release his own songs by himself.Very soon Ilous joined forces with Patrice Decuyper with whomhe wouldrecord the amazing LP on offer here. Issued also on Flamophone in July 1971, its blend of folk & pop brings to mind echoes of The Beatles, Crosby, Stills, Nash & Young or Joni Mitchell. The sound on the LP is amazing, they took one whole year to produce it, as they were using free studiohoursnow and then to stay into a budget,and they played most of the guitars andkeyboards and were helped by friends from Le Système Crapoutchik on other instruments. The production is excellent and the compositions are amazing, probably one of the most impressive French-sung LPs of all time, and a must for lovers of 60's and 70's perfectly arranged & produced, well craftedworks." " It is reissued on vinyl for the first time since its original release, mastered from the original tapesand featuring a bonus7" containing the two songs from their 1972 non-LP single plus an insert with liner notes. In a limited edition of only 500 copies."