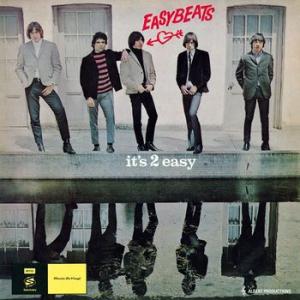 The Easybeats second album It's 2 Easy was first released in Australia, before the record was globally available 27-years later. The album was heavily influenced by the sound of other Merseybeat groups from the mid-'60s, like The Beatles and The Kinks. It spawned several hits, including “Women” and "Sad and Lonely and Blue”. They integrated elements of blues and folk in their attractive songs. It's one album full of surprises and it shows how they were growing in their musical abilities. The L.P., containing not only 14 songs but something that goes a lot deeper. In each and every track there lies a tear, a drop of sweat, some lost sleep, missed meals, some happy moments, some unhappy moments and all the other ingredients that go into making their life and work worthwhile.

The majority of these tracks were recorded in the wee small hours of the morning mostly between shows. The songs were conceived and written either while traveling on planes or riding in cars or taxis and sometimes while waiting in dressing rooms to go on stage. It's 2 Easy is available as a limited edition of 750 individually numbered copies on silver colored vinyl.