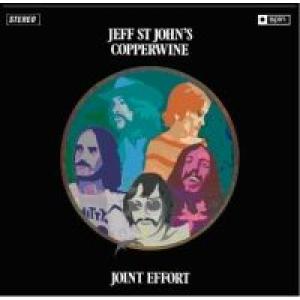 Jeff St John, stalwart of the Australian '70s psych scene, lent his name to two previous bands (Jeff St John and Id and Jeff St John and Yama) before releasing Joint Effort as Jeff St John and Copperwine. St John, born Jeffrey Newton in Sydney in 1946, was diagnosed at birth with spina bifida, an affliction which he faced with fortitude throughout his life. Although never achieving significant commercial success, St John's stint with Copperwine proved to be the most successful period of his career with the band touring incessantly and even playing a gig with the Melbourne Symphony Orchestra. However, friction began to develop between St John and Copperwine, resulting in the singer's departure in 1971 to pursue a solo career. Joint Effort, originally released on the Australian Spin label (SEL 933742), and probably the pinnacle of St John's recording career, is very much a psych prog crossover album, although some soul influences do crop up, particularly on the surging organ-based cover of The Temptations Cloud Nine as well as highly competent covers of Sly Stone's Sing A Simple Song and Blind Faith's Can't Find My Way Home. The rest of the album is made up of some excellent self-penned material, the outstanding tracks being the long instrumental, Any Orange Night and the psych-tinged Fanciful Nights Of Mind. Joint Effort is excellently recorded, capturing the fragile essence of much of the material beautifully. All in all, an extremely good album. Highly recommended. Artist: Jeff St John and Copperwine
Track Listing 1. Cloud Nine 2. Sing A Simple Song 3. Fanciful Flights Of Mind 4. Any Orange Night 5. You Don't Have To Listen 6. I've Been Treated So Bad 7. Days To Come 8.Reach Out 9.Can't Find My Way Home 10.Train 11.Remember 12.Enviroment In Three Parts