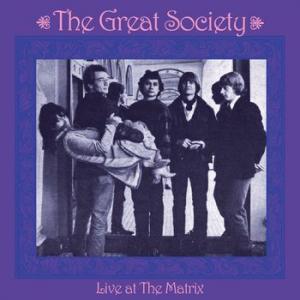 The Great Society was a 1960s San Francisco rock band that existed briefly from 1965 to 1966, and was closely associated with the burgeoning Bay Area acid rock scene. Best known as the original group of model-turned-singer Grace Slick, the initial line-up of the band also featured her then-husband Jerry Slick on drums, his brother Darby Slick on guitar, David Miner on vocals and guitar, Bard DuPont on bass, and Peter van Gelder on flute, bass, and saxophone.

The band released only one single "Someone to Love" written by Darby Slick. Released in February 1966 it made little impact outside the Bay Area but it was re-named “Somebody to Love” and became a massive hit for Jefferson Airplane, the band Grace Slick joined after The Great Society.