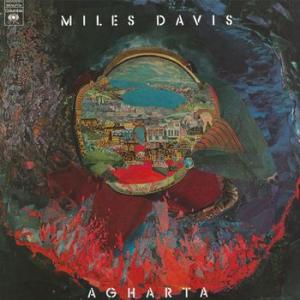 Agharta was recorded on the afternoon in 1975, at one of two concerts Miles Davis performed at the Osaka Festival Hall in Japan. He performed with his septet—flautist and saxophonist Sonny Fortune, bassist Michael Henderson, drummer Al Foster, percussionist James Mtume, guitarist Reggie Lucas, and Pete Cosey, who played guitar, synthesizer, and percussion.

Produced and recorded by Teo Macero, the album's four seemingly unstructured segments emphasize the playing of Davis' sidemen rather than his own trumpet. It eschews both melody and harmony in favor of a combination of riffs, crossing polyrhythms, and Funk-oriented grooves for soloists to improvise throughout.

The album has received retrospective acclaim as an important and influential Jazz-Rock record. Its abrasive music and Cosey's innovative playing influenced a generation of young musicians, including those in the British Jazz scene.