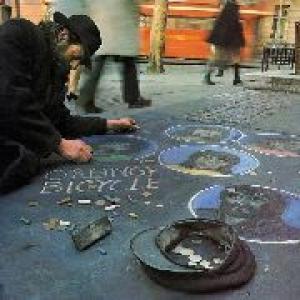 Vinyl reissue of an ultra-rare Mortgan Bluetown Records-LP. Orange Bicycle was an English pop band that existed from 1967 - 1971. The band played a style influenced by The Beatles and the Hippie-culture, as well as by some other groups like The Rolling Stones. Members were John Bachini, Kevin Curry, Bernie Lee, Wilson Malone and RJ Scales. The first single of Orange Bicycle, 'Hyacinth Threads', was a number-1-hit in France and quite successful in some other European countries, but not in Great Britain. All the time of its short career, Orange Bicycle was more popular outside than inside their home country.
In 1968 the band started to cover e.g. songs of The Rolling Stones ('Sing This All Together'). Its most successful album 'Orange Bicycle 'includes covered songs of The Beatles ('Carry That Weight'), Bob Dylan ('Tonight I'll Be Staying Here With You') and Elton John ('Take Me To The Pilot'). In 1971, the band broke up."