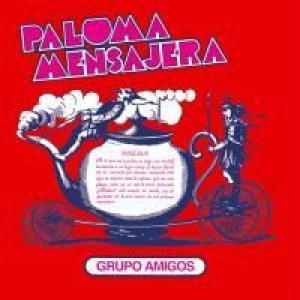 Originally released as a demo pressing in 1973,  '' Paloma Mensajera''  by Peruvian band Grupo Amigos is without doubt one of the rarest albums from the South American psych scene. Only a handful of copies were pressed for the band members and needless to say,  an original copy is impossible to find now. The band was formed by some long- time friends of Saúl and Manuel Cornejo,  both from legendary Peruvian bands Laghonia and We All Together. Manuel Cornejo played drums on the album recordings and Saúl was the session engineer.
Influenced by groups like Beatles,  Byrds,  Stones,  Badfinger,  Shakers and of course Laghonia and We All Together,  the music ranges from terrific guitar psych- rock like '' Dirty Girl''  (which sounds like an outtake from Laghonia's first album) to British sounding pop- psych ('' Mr. Taylor's Train'' ,  '' Psychiatrist'' ) harmony pop á la Byrds on '' Looking for home'' ,  a few rockin' tunes and some beautiful mid- tempos which show their We All Together influence. They alternate English & Spanish in their lyrics.
On this Guerssen reissue,  you'll find the complete recordings of Grupo Amigos,  including their only album and a killer non- LP 45 recorded the same year. Features a booklet with liner notes and rare pictures. Taken from the original master tapes.