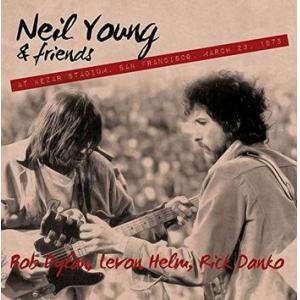 When Neil Young closed the S.N.A.C.K. Benefit concert in San Francisco on March 23, 1975, he was playing with a one-of-a-kind line up never to be duplicated.

Also performing as part of the group were Bob Dylan and three members of the The Band - Rick Danko, Levon Helm, and Garth Hudson. With additional help from a couple of Young's sidemen, they charged through a mixture of Young, Dylan, and Band songs, ending with a twist on Bob Dylan's hit 'Knockin' on Heaven's Door', heard here as 'Knockin' on the Dragon's Door'.