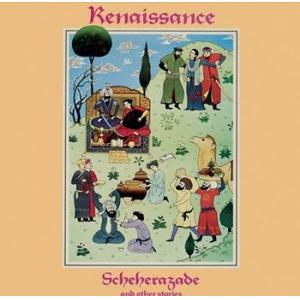 A classical rock concept album, first released in 1975 and featuring the wonderful vocals of Annie Haslam, performing songs inspired by Rimsky-Korsakov’s ‘Scheherazade’, as well as other charming folk/jazz flavoured songs like ‘Trip To The Fair’. Renaissance took their move towards orchestral music to the ultimate conclusion with the creation of this homage to the ‘Tales Of The Arabian Nights’. With a string section supporting the regular band, there are many musical delights to savour.

Annie Haslam’s voice is at its most beautiful on the yearning ‘Trip To The Fair’, but it is the nine-part ‘Song Of Scheherazade’ that stretches the capabilities of the musicians as they embark on a classical odyssey, as fascinating as the tales the Princess told the Sultan during her ‘1001 Nights’. John Tout’s piano playing is superb throughout, and the production by David Hitchcock ensures that this is gripping and ambitious musical entertainment with timeless appeal.