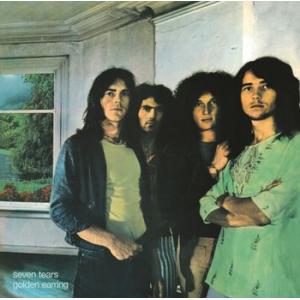 Golden Earring have been together since 1961 and in the summer of 1971 they recorded the album Seven Tears. They started to experiment, ended up on a psychedelic trip and used the now legendary ARP synthesizer for the first time. The album's highlight is "She Flies On Strange Wings", an art-rock epic that combines verses done in a stomping, heavy metal style with spacy choruses and a slow, dreamy midsection that is strongly reminiscent of Pink Floyd.

Golden Earring's current line-up includes two founding members George Kooymans (vocals and guitar) and Rinus Gerritsen (bass, keyboard), along with Barry Hay (vocals, guitar, flute, and saxophone) a member since 1968 and Cesar Zuiderwijk (drums) a member since 1970. They created over 40 hits and 30 albums, many achieving either gold or platinum status in their home country, the Netherlands.

Seven Tears is available as a limited edition of 1000 individually numbered copies on lime green coloured vinyl and the package contains a 4-page booklet.