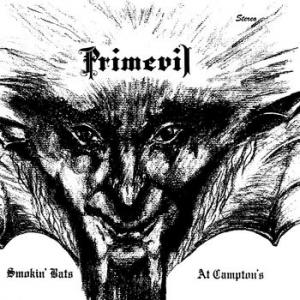 Originally a private and limited vinyl release in 1974 on the 700 West label (they also released the Zerfas album a year earlier) S m o k i n ' Bats at Campton's stands as a fine example of '70s hard rock. Based in Indiana, P r i m e v i l had two excellent lead guitarists in Larry Lucas and Jay Wilfong, and their twin six string attack was the main driving force for the eight tracks featured on the album. Not forgetting also the rhythm section of Mel Cupp & Mark Sipe, keyboards by Mo Whittemore and the expressive vocals of Dave Campton, all making Primeval a very formidable outfit indeed. The overall sound is bluesy hard rock, very much in the style of Led Zeppelin and Black Sabbath, although in recent years they have also appealed to psychedelic collectors willing to pay up to $100 for a copy of the album! Highlights include the opening track L e a v i n ' , Progress, and the now legendary (some say insane) Hey Lover, allegedly written and recorded in one wild night!Although only this one release exists under the guise of Primevil, the group were also behind the album and singles by Buccaneer, released around 1980.
Track Listing: 1. Leavin' 2. Progress 3. Fantasies 4. Pretty Woman 5. Tell Me If You Can 6. Hey, Lover 7. High Steppin' Stomper 8. Your Blues