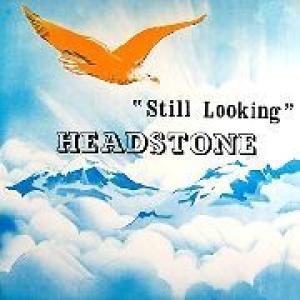 This reissue by Headstone, a hard rock quartet from Indiana was their only album release. They were discovered by a local producer from Ohio, who owned the label "Starr-Records" and went there to record "Still looking" (further they released two non-lp 45 records in 1975, here three bonustracks on LP-version). In the psychedelic underground collectors scene the album got established as a classic psych-hard-rock rarity. Their sound is strong and melodic with awesome guitar/organ leads, great and catchy vocals. Their natural float creates a hypnotic atmosphere and makes you listen to this album again and again. At all their musical spirit is closer to the end 60s blend, than the recording year 1974 reflects, and sometimes they remind of the early Bloodrock stuff. Acid Archives (Patrick Lama): "The eight minute title track is a killer journey through local underground guitar psych, and there's plenty more good stuff aboard including some more lyrical moves. Underrated LP, solid all through, better than many $1000 LPs." Lp will come with a band´s bio insert and is remastered to a fresh dynamic sound. For sure an outstanding hard-rock album with several of flashes of the upcoming "new wave of British Heavy Metal (NWoBHM), an album you should not miss! "