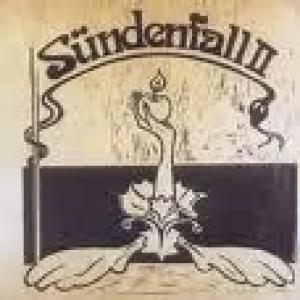 Suendenfall II from the Kevelaer area at the Lower Rhine played a mixture of folk and jazz, influenced by Jethro Tull. While their predecessors, Suendenfall, exclusively dedicated themselves to jazz, the group included folk after a change in line-up and band name (following the example of Amon Duul II). In 1972, Hubert Schmitz invited the band into his Trepitia film and sound studio in Alpen-Druept for free recordings, as he wanted to test the newly installed equipment after a recent move into the new location. Thus the recordings were made for the album "Suendenfall II" (Trefiton HS 1017), which was released in a small edition of 200 copies at the end of 1972. Today it is sold at a price of about 500 to 1000 in mint condition. The LP re-issue is a limited edition of 1000 numbered copies and comes with a four-page colour insert in LP size, including a detailed band history in German and in English language, many band photographs, informations about the Trefiton label etc."