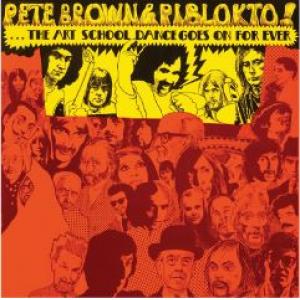 • Pete Brown reveals the origins of Piblokto! in an exclusive new interview with Chris Welch for the ""

• This debut Piblokto! LP was first released on the progressive Harvest label in 1970. ""

• Expertly remastered in the studio by Jon Astley ""(who has worked on recordings by George Harrison, Led Zeppelin, the Who, and many others). These classic recordings havenever sounded so good!""

The long title was inspired by the kind of endless art school parties that provided work for touring bands during the 1970s and lots of fun for musicians and students alike."

The album also represents another chapter in the saga of Pete Brown saga, who sang and performed with his own critically acclaimed groups, having first come to fame as a beat poet who wrote the lyrics for Cream, together with Jack Bruce, during the Sixties. 'Things May Come....' covers the period after the singer was sacked from his previous group, the Battered Ornaments and then moved on to form another outfit, mysteriously called Piblokto! Pete tells the whole story in the CD liner notes in an exclusive new interview with Repertoire's Chris Welch. "

Piblokto! was deemed a much 'rockier' band than the more jazzy Battered Ornaments and they proved a successful 'live' touring band. With the brilliant Jim Mullen on guitar and Dave Thompson (keyboards) it's easy to understand why they were so popular.Brown also explains the meaning behind the strange title of the band and discusses the origins of the various songs. A classic Seventies' album, not to be missed!"

1. Things May Come And Things May Go, But The Art School DanceGoes On Forever "