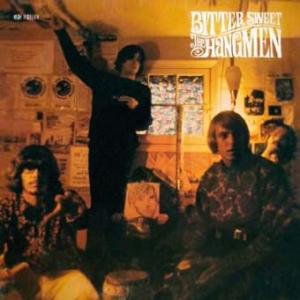 After appearing on several compilations in recent years (including Pebbles & Signed D.C.) the Hangmen finally have their sole album reissued on CD! Formerly known as The Reekers and based in Washington D.C., the Hangmen were centred around the talents of guitarist Tom Guernsey and put out three 4 5 's, plus the album Bittersweet, in that groundbreaking year of 1966. Originally released on Monument (SLP 18077), the album is a fine example of the U.S. mid 60's sound whether it's close harmony soft pop, or a stomp through some fuzzed beat/garage/R&B. Their first two classic 45's (the harmonica driven punk of What a Girl Can't Do, and the gentle fuzz of Faces) are both reworked on the album, and included alongside cover versions of Dream Baby ('psyched' with a hint of sitar), Let It Be Me, and an extended workout of Van Morrison's Gloria. Elsewhere the British Invasion presence is evident as well as the closer to home sounds of T h e Byrds and Lovin' Spoonful. Groovy listening from beginning to end!But in 1966, the times were still a-changing, musical boundaries too, leaving many bands including the Hangmen behind. Thankfully though, what's not been allowed to slip away here is this innocent reminder of that golden age...Bittersweet by the Hangmen!
Track listing:1. Dream Baby 2. Guess What 3. Crazy Man 4. Let It Be Me 5. Terrible Tonight 6. Faces 7. I Wanna Get To Know You 8. Every Time I Fall In Love 9. When A Girl Can't Do 10.Isn't That Liz 11.Gloria