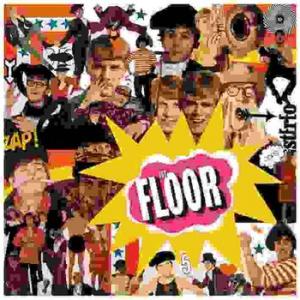 This is the one and only album from the Danish band, Floor, which originally appeared on the Phillips label in 1967 and which was often referred to as the Danish Sgt Pepper. F l o o r, which emerged from the remnants of beat band Hitmakers, used their American and British influences to considerable effect, from the groovy Penny Lane trumpets on the opener, Damned Little Fool, to the Eleanor Rigby-esque Trusting Mr Jones, with its slice-of-life lyrics and heavy harpsichord accompaniment. Clearly Floor loved the Beatles, although the adroit use of backward guitars and other effects give their songs a far trippier and psychedelic feel. The evocative sitar-like jangly guitar style of Roger McGuinn (think Eight Miles High) and exotic finger cymbals on the track A Rainbow Around Us takes one on a trip to the Far East. Each of the album's self-penned tracks is a "one-off", with the radically different musical styles making this album a brief voyage round the '60s musical galaxy. One pundit was moved to describe the album thus "This is a truly INCREDIBLE pop psych album - one of the all-time greats that so few have ever gotten to hear". Highly recommended
Track listing:1. Damned Little Fool 2. Trusting Mr Jones 3. Nevertheless 4. Hey. Mr Flowermahn 5. In Every Hand 6. Turn It On 7. Mrs O"Grady 8. Moonbeam 9. A Rainbow Around Us 10. Little Mr So And So 11. I Think I Can Change You 12. Hush