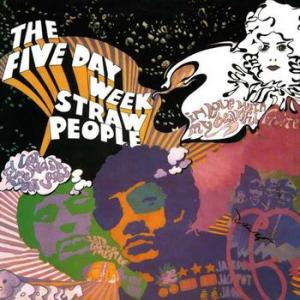 Five Day Week Straw People was an LP that captured a day in the life of sixties London. Released in September 1968, Five Day Week Straw People were not a band, but rather the work of London-based songwriters David Montague and Guy Mascalo, who composed a song cycle that they once described as being about "people who work monotonously during the week and then try to enjoy themselves at weekends." The song writing pair hired in guitar, bass, drums, vocals and set up in a makeshift studio recording space (actually a school!). Taking just four hours, most of the tracks being recorded in one or two takes, the results were exceptional. Tracks like the title song, Im Going Out Tonight and the dreamy, shimmering Sunday Morning being particularly strong. Packaged in a colourful psychedelic sleeve, the LP is now quite rightly regarded as one of the classic LPs of the era .

The late 1960’s truly saw the flowering of the concept album. Following the 1967 triumph of the Beatles meisterwork “Sergeant Pepper’s Lonely Hearts Club Band”, 1968 followed with the Small Faces’ “Ogdens' Nut Gone Flake”, which followed the adventures of Happiness Stan in his quest to find the missing half of the Moon, whilst “S.F. Sorrow” by the Pretty Things portrayed the life of Sebastian F. Sorrow, from birth through love, madness, disappointment and ultimately to a lonely death. Less heralded at the time, but now much sought after, was the album recorded by the Five Day Week Straw People, which relates the imagined “typical weekend of the average nine-to-five worker” as they recounted in an interview at the time. The songs had been written by David Montague and Guy Mascolo, who had first met when they were hairdressers in Clapham in 1963. Guy had just co-founded a salon with his brother Toni, which since then has mushroomed into the hairdressing juggernaut that is “Toni and Guy”. However, in 1967, Guy and David were songwriting in their spare time and, having completed demos for a number of songs, happened to bump into an engineer from the small independent Saga Records. They were quickly signed to the label and put into the recording studio, with backing from Mike Hawksworth on bass guitar, John DuCann on guitar and vocals and Jack McCulloch on drums. Perhaps inspired by the extraneous noises used on “Sergeant Pepper”, David and Guy recorded sound effects for use on their own album, which they employed to better evoke the feeling of the weekend. Thus, car engines revving, children playing, a woman in high heels descending a staircase and a rainstorm complete with thunder all find their place. Mix in some spoken word vocals and a judicious sprinkling of special effects, and the result is a quirky and entirely charming album that will transport the listener to those heady days when just about anything seemed possible. Listed as one of Record Collector’s “100 Greatest Psychedelic Records” (nestling immediately below the Moody Blues “In Search Of A Lost Chord”!), this is an album that deserves a place in any discerning record collection. Clive Wills 2018