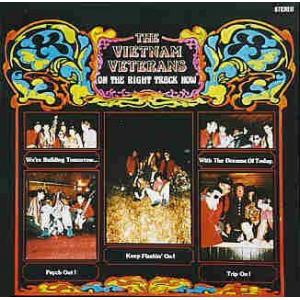 Two landmark albums by French psych/garage/beat legends from the 80's. 'On The Right Track Now' recorded in 1982 and 'Crawfish For The Notary' from 1984. The Vietnam Veterans were the best Psychedelic punk band of their time. Some people even said that they were the only real psychedelic group. When the Vets, as their fans used to call them, first emerged on the scene at the beginning of the 80ties they were unlike any other band. They didn't get this culture through CD reissues. Their record collection have A smell of life. Psychedelic music meant to them: free human beings playing for free human beings. From the first days, the five VVs had decided to split after five years of communal life. And that's what they did after six albums and a series of unforgettable gigs. Mark Enbatta was the originator, the voice, the guitar and the pen of the Vietnam Veterans. Raised on LSD, he will always believe in a world of love and freedom. This man is a fighter, an anarchist and everything the right wing doesn't like. He gives his life every time he writes or sings. Anyone who's got a heart and a soul can feel it.