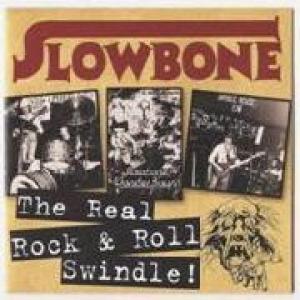 A comprehensive twenty four track CD covering this London rock band's full history from 1971-77 that encompasses prog-rock blues, pop, glam, heavy funk and even some post Turquoise influenced psych plus a rare Dutch radio interview from 1975. Detailed history written by Pete Sarfas who saw the band live over fifty times in the early to mid 70s, blowing the lid on the explosive story of how some of Slowbones songs, ideas and even logo were ripped off by the Sex Pistols and Iron Maiden.
Includes many rare photos and items of memorabilia splashed across an eye-catching poster sleeve. Taken from original quarter inch masters, The Real Rock & Roll Swindle highlights the band's song writing strengths by presenting a cornucopia of rare studio gems, catchy singles, forgotten B sides and exhilarating live material. There are some truly memorable songs on this CD including the outstanding We're So pretty which later went on to worldwide fame after being doctored to suit the punk movement. Now you can hear how it should originally have sounded by a band that richly deserved stardom in the 70s"