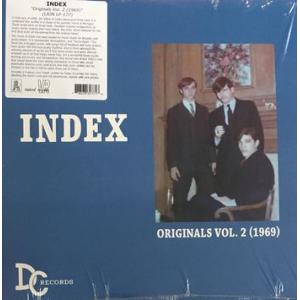 In February of 2009, Jim Valice of Index discovered three reels in a cardboard box stuffed in a closet of his parents home in Michigan. These songs from 1969 were on those reels. Fourteen original compositions by Index, seven making their vinyl debut, the other seven released for the first time ever, all transferred from the original tapes!

Index was once again a pure power trio by 1969. There was massive demand for Index personal performances. Index was not interested. It was becoming more difficult for guitarist John Ford to travel back from Yale University to Detroit on a weekly basis. Index wanted to push the bounds of their own creativity. They chose to use their limited time together to write and record.

Index were the epitome of a DIY band. They made great use of the newly developed sound on sound (SOS) technology. It allowed Index to record basic tracks (guitars, drums and lead vocals); with SOS they then could add keyboards, additional guitar tracks and vocals. A musical revolution in miniature!

The addition of Tom Ballew on bass in 1968 made a positive impact on Index’s sound. He and drummer Jim Valice laid down a musical foundation in and around which John would weave his guitar. ‘Livin’ In Detroit’ and ‘Kick It Out’ are two perfect examples of that dynamic. Here you’ll also find over-the-top psychedelic numbers like ‘Street Crime’ and the fast version of ‘Yesterday and Today.’ But on this album you'll also find mature romantic ballads filled with angst, such as ‘Love is Here To Stay’ and ‘I Walk Alone.’ The hip-shaking, organ-driven ‘432 Lakeshore’ highlights another groovier aspect to Index’s sound.

The music of Index has been lauded by music heads for decades with good reason: the band has a druggie sound, with songs full of feedback and fuzzy guitars, hazy guitar riffs and loud pushy rhythms. It's wonderful, droning, murky and introspective: the atonal side of late 1960's rock that would leave the most lasting impression on those who would eventually become punk, post-punk and indie rock... artists like Joy Division or the Fall or Felt to name three out of a thousand. Or in the case of the previously unreleased song ‘Something Sweet,’ The Jesus & Mary Chain. It’s as if Index projected their sound through time and space, creating sonic templates for future artists. Index continues to inspire bands all over the world even to this day. Listen to Index and feed your soul.