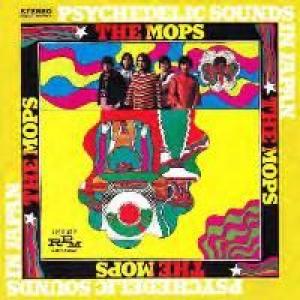 Julian Cope, in his book Japrocksampler, said that Tokyo’s The Mops made some of the most urgent ly deranged and euphorically disruptive music of the entire Group Sounds era. Compared to other Japanese bands of the period The Mops were too weird, too punk, too ugly. "

The inclusion of their theme song I’m Just a Mops (heard here) on Rhino’s Nuggets II box set confirmed that Cope was right. Released originally in Japan in April 1968, The Mops debut album Psychedelic Sounds In Japan was the country s first self-declared psychedelic record. Even though they sported kaftans, beads and Sergeant Pepper jackets, The Mopswere as Cope said too tough, too jagged to be true flower people. "

Original songs like I’m Just A Mops were fuzz guitar driven stompers that revealed The Mops were at heart garage punkers. In their hands, on Kienai Omoi, even the sitar sounded deranged. "

In thrall to the San Francisco sound their manager had visited Haight Ashbury and brought the first Jefferson Airplane album back to Japan they recorded unhinged covers of The Airplane s Somebody To Love and White Rabbit for Psychedelic Sounds In Japan. They also loved The Animals their takes of San Francisco Nights and Inside Looking Out Are testaments to The Mops wildness. "

This first-ever official reissue of Psychedelic Sounds In Japan outside Japan has been licensed for release by JVC Records.This essential, fun and historic album is supplemented by an intense non-album single from 1968. "