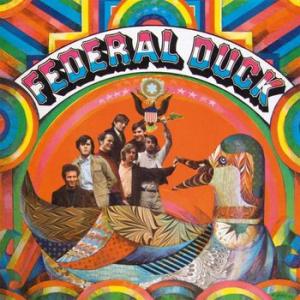 Another underrated gem to get its first digital release courtesy of Radioactive Records. This time it's the turn of the bizarrely-named Federal Duck, which made its appearance on the Musicor label (MM 2162) in 1968. Formed by banjo exponent George Stavis, Federal Duck (named after the Federal Duck Stamp Program which was enacted by conservationist Jay "Ding" Darling and US President Franklin D Roosevelt in 1934), produced this lone musical effort which, once you get past the absurd cover, contains a consistently-good album which is mildly jazzy, has some fine bass and an ever-present darkish vibe. There are a few upbeat mold-breaking songs (one even sounds like the Holy Modal Rounders) but generally a soft-psych feel pervades throughout. It is interesting to speculate as to how Federal Duck ended up on the Musicor label, whose other acts included far more illustrious artists such as Gene Pitney, The Platters and George Jones. However, the relationship was destined to last for just the one album, with Stavis departing soon after to form the Californian communal rock band Oganookie and then to record an eponymous album for Vanguard. Although there really isn't that much information about Federal Duck out there, the general consensus is that this is an album that deserves greater recognition than it has hitherto received
Track Listing 1. Knowing That I Loved You So 2. Easy Virtue Blues 3. Tomorrow Waits For Today 4. Just Like The Snow 5. Bird 6. Hello 7. While You're Away 8. Peace In My Mind 9. Just A Band 10. Friday Morning 11. Dawn Comes Slow 12. Ain't Gonna Be Nobody To Sing The Blues 13. Circus In The Sea