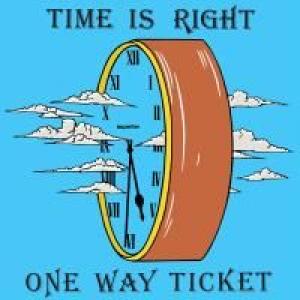 Behind this obscure and mysterious British late-sixties psych record, we find the team of producers Brian Carroll and Damon Lyon-Shaw, famous for their involvement with mod-psych bands like Factory and Five Day Rain. During the late sixties, they also recorded some tracks of their own at the legendary IBC studios and produced a bunch of underground groups for their Homegrown company. Basically, instead of a real group, One Way Ticket was in fact a mixture of various recordings from bands that Carroll and Lyon-Shaw had been involved with producing through Homegrown during 1968, along with some recordings of their own. For some strange reason, all of these recordings surfaced many years later, when they were gathered and released as a budget pressing album, featuring a mysterious cover art and made-up liner notes & credits, under the One Way Ticket name on the President label in 1978. Musically, it’s an odd album which ranges from late-sixties underground psych in the Chocolate Soup vein to freaky blues-psych not unlike Oliver’s “Standing Stone” with some glam-mod-psych and rockin’ tunes. It even features three tracks also covered by the legendary Five Day Rain on their rare album.