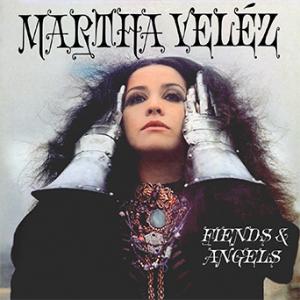 Talk about an album that shoulda/coulda/woulda been a hit '1969's Fiends & Angels paired the powerful pipes of American singer Martha Veléz with the crème de la crème of the British blues-rock scene. And when we say 'the cream' we mean it literally: Jack Bruce and Eric Clapton are both on this record! Not to mention Brian Auger, Johnny Almond, Jim Capaldi, Paul Kossoff, Christine McVie, Mitch Mitchell, Stan Webb, Chris Wood'the mind boggles. All were assembled by producer Mike Vernon, upon whose Blue Horizon label Fiends & Angels came out in Britain, while it was released Stateside on the Sire label. Which may explain why the album didn't become a bigger hit; at this early point in its existence Sire was a small imprint basically dedicated to importing the best of British blues and progressive rock, several years away from its Ramones/Talking Heads heyday. So perhaps the marketing resources weren't there'how else to explain how Fiends & Angels (so named by Veléz in honor of her backing musicians, who, to paraphrase her words, were fiends when playing and angels when not) didn't make a bigger splash, especially when you consider that her voice rivaled Janis Joplin's in its range and power. We at Real Gone Music are thrilled to present the first American vinyl reissue (and the first LP reissue in nearly 50 years) of this blues-rock cult classic, with its original Sire gatefold album jacket art housing a limited pressing of 700 copies in purple vinyl.