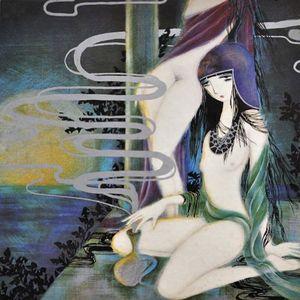 Truly a Japanese psychedelic female acid folk masterpiece. Released on July 25th, 1976, Mikkô was Sai Yoshiko's second album, a wonderful acid folk album on which she gets assisted by a string of big name musicians such as Kuni Kawachi (of the Happenings Four amongst others) the arrangements of the songs to his hand. The disc is based upon Sai's self composed songs, making it her first real total album. At times the disc draws in Middle Eastern influences (sitar and tabla) but once she gets into singing, the listener gets subdued into her own private, mysterious sonic world, through which one gets sucked in by her wide-ranged vocalisations. At the time of this recording, Sai Yoshiko was merely 23 years old. This is a real stunning female acid folk masterpiece with well-balanced psychy touches. Totally obscure, much in demand by Japanese psych heads and rather hard to track down. One of Sai Yoshiko's biggest fans is Jojo Hiroshige from Hijokaidan and Alchemy records, who eventually, 25 years after she recorded this stunning album, dove in the studio with her for the "Crimson Voyage" CD (Alchemy Records) on which she merely attributed some sighs and moans. This album is really a stunner and a must for people into some more advanced Japanese Underground historical recordings.