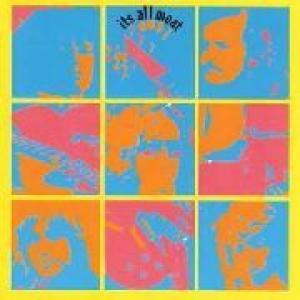 It's All Meat were a late 60s/early 70s band that hailed from Toronto and released this excellent album in 1970 (Columbia). Prior to that, It's All Meat had been known as The Underworld. The Underworld released a superb,crudegarage single (Go Away/Bound - the label is Regency)in 1968 and also recorded some fine unreleased material captured on acetate. As mentioned before, some of the members of The Underworld would form It's All Meat. In 1969 this new group wouldreleasetheir debut 45, Feel It coupled with I Need Some Kind of Definitive Commitment. The A-side combined MC5 energy with New York Dolls-style swagger and features plenty of feedback and great guitar breaks. It's one of the great proto-punkers.

Their album was released the following year and feartured 8 fresh original numbers written by drummer Rick McKIM and keyboard player/lead vocalistJed MacKAY. There are a bunch of good, solid stonesy garage rockers that form the axis of this lp: Make Some Use Of Your Friends, Roll My Own, You Brought Me Back To My Senses, and You Don't Know The Time You Waste. The latter track would be released as the group's second andfinal single but Roll My Own and Make Some Use Of Your Friends were just as good, featuring fine psychedelic guitar work and raw vocals. Other note worthy tracks flirted with blues (Self-Confessed Lover) and folk-rock (If Only) but the lp's brightest momentswereits two 9-minute marathon compositions. Crying Into A Deep Lake was full-blown Doors psychedelia with spacey keyboards and spooky Jim Morrison influencedvocals. The otherlengthy track, Sunday Love, sounds like a strange Lou Reed/John Cale concoction with lots a great psychedelic guitarnoise and soft folk-like passagessprinkled with light garage keyboards. So while these last two tracks are very long, they never wear out their welcome and arerequired listening for both garage and psych fans. The album's production teeters between aprimitive recording soundand the typical major label gloss, making it just right.

It's All Meat is a fine, consistenttrip all the way thru. It's one of the best late period (really late) garage rock albums I know of. The album's hard rock and proto-punk sounds give it a nice, visceral edge.